How do I know when it is time to clean my dryer?

Get My Free Quote

You can ask that question to Robert DeNiro! dryer vent cleaned 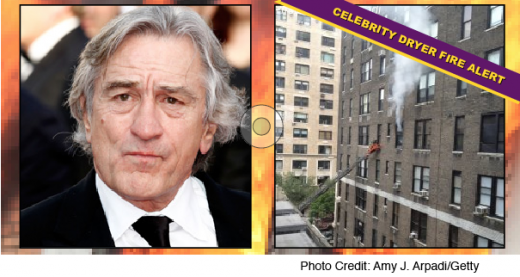 Robert De Niro’s Central Park West apartment went up in flames when lint in a clothes dryer caught fire a few years ago. “Right above my head these 12-foot-tall flames exploded out of the 5th floor window,” said Nathan Bear, 23, who was outside moving his car.

The fire started around 2 p.m. in a pricey high rise near West 68th Street and took firefighters an hour to get under control, officials said. “The dryer in 5W caused the fire that spread through the entire 5th floor,” said Battalion Chief Mike Meyers. Meyers, a firefighter at the scene said, “Some of the lint [in the dryer] caught fire.”

The 5th floor had extensively damage from the fire, smoke and water, fire department officials said.

Did you know that dryers cause more fires than chimneys?

Dryer vent cleaned – There is no way to know when a fire can sneak up on you, that’s why the manufacturers and fire departments recommend early cleaning and inspection as the only prevention.

Dryer vents require regular service for safety assurance. But your dryer is at greater risk if:

• Clothes are hot but still damp after one cycle.
• your dryer takes more than one cycle to dry¬
• Dryer is hot to the touch
• Lint accumulates around/behind dryer. ¬¬
• Laundry room is humid or warm when dryer is in use
• Musty smell coming from the dryer

Dryer vent cleaned – In average there are about 12,700 clothes dryer fires a year resulting damages, 330 injuries, and 20 lives lost.

Our professionally trained technicians have helped AirWiz Ducts Cleaners become an expert in the ducts cleaned and dryer vent cleaning field. We are proud of the fact that our company has been selected to work in some of the nation’s landmark institutions. After successfully performing HVAC air duct cleaning on more than 100,000 systems, AirWiz Air  Duct Cleaning Gaithersburg  is: